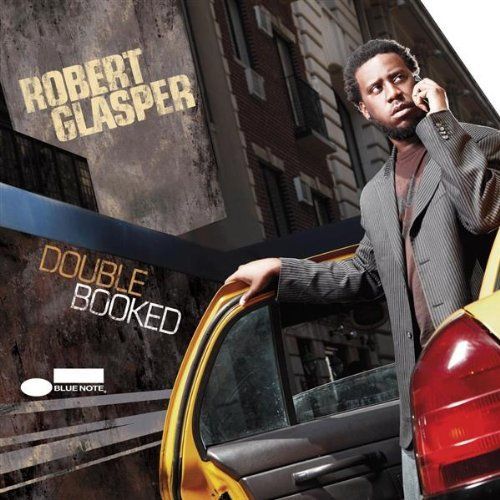 Invited to accompany them was the funk singer Bilal, with whom they’ve collaborated closely over the past ten years.

These musicians are tremendous performers. Their presence on stage seems to come into play as much the skill and ease with which they handle traditional jazz repertoire (Robert Glasper at the piano, Derrick Hodge on the bass and Chris Dave on the drums). In addition, the way that they listen to one another and engage in a three-way dialog turns the concert into a sculptural encounter with the public.

It’s an homage to the first great jazz trios (those of Thelonius Monk, Charles Mingus …), which crosses over into another arena: that of current day rhythms, that are just as powerful and popular: rap, hip-hop…

Robert Glasper’s music is built upon solid technical foundations, conferring to all three musicians a physical presence worthy of a battle scene or an “oratory joust”. Their jazz is in no way an abstract concept. It transits through their bodies, and this is what we see when they perform live. Listening to them and seeing them seem to go together; it’s necessary to “feel” them play. It’s so strange that in concerts sometimes, certain people close their eyes as if to better hear the music and to concentrate upon listening. Doing this here seems almost anachronistic, for the playing is very physical and carries over from one musician to another by passing through the audience. Not that it’s spectacular, or that the musicians gesticulate or enter the realm of “choreography”. We remain within the framework of the trio, joined now and again by Bilal, who goes back and forth between the stage and the wings.

Their jazz could thus be qualified as “performative”. It transfixes us and comes to us, not as a presence that envelops or surrounds us, but as something physically lived and real, questioning its own tangibility and its tools for inscription. This is especially true for ears accustomed to listening without the presence of the musicians’ bodies.

Listening to music most often takes place without the musicians’ presence. Musicians themselves take part in “games” of invention allowing them to create albums with certain effects that couldn’t exist without a principle theme leading from one piece to the next. Sometimes the album is a “concept” that can’t be replayed.**

Something occurs on stage that can’t be grasped through recordings, no matter how attentively we listen to music on the iPod or the stereo. Nor can a filmed concert take into account what happens on stage, in that the performance is lived at the moment, as it unfolds.

Robert Glasper begins with a few notes that constitute much more than an introductory sketch, for right away they bring us into a musical process that could have begun elsewhere and differently, and could in fact stop at a later moment, like a pause in a musical piece or, more precisely, like a piece that he could have played the day before and then took up the next day, but that during the interval, hadn’t been interrupted and had continued to play, somewhere.

It’s music that continues to play through him.

Most surprising, then, are not these notes that literally open the concert; after an introductory exchange, they give us the strange impression that their virtuosity escaped before they appeared, as if in a paradox of time. A jazz piece has already been played but we’re someplace else; and the other pieces follow. For in reality, the pieces don’t only follow one after the other, and that’s what’s surprising. It’s not that they follow one after the next; the drums don’t bring rhythm to the melody, which is then taken up by the bass. A reversal has taken place: it’s the piano that accompanies the other instruments and pushes them to the rank of soloist, of “carriers” of tone and difference. It’s well known that jazz is nourished by all kinds of sounds and other sources: horns, metallic clicking, whistles, babbling… The drums and bass thus open up into a sonorous imaginary that has borrowed from urban life as much as from classical music, for the pleasure of melody. We witness here the decomposition of their sonorities, as when a child tries to play an instrument for the first time and explores all the possible “noises” while mimicking the gestures of a professional musician.

A brutal virtuosity that is socially, ethically and physically sensitive is visible to the spectator and reaches beyond conventions, beyond baseball caps and t-shirts stripped down to the essential. The tremendous clarity of the musicians’ playing brings us back to the origins of music: friends among themselves attempting to cast out the demons.

Chris Dave produces sounds that ripple out from the drums. This slight individual, hidden under his cap in the background, awakens with the first strokes in an agitation of hands and feet circulating outward towards the drums and towards sound. A respiration sets in that is extremely concrete and palpable in the ease with which brilliance is hashed out. As a result, the rhythm is almost “deconstructed”, bringing us back in turn to the childhood discovery of making gestures, as we mentioned above, and to the virtuosity of one who unlearns. Chris Dave’s playing is like enchanted mechanics, like the noise of machines or the flight of a bee.

Next to Chris Dave, the bassist Derrick Hodge also creates a sensation: his presence is imposing, monolithic, behind which we almost forget his double bass. His role in this trio, if we’re not afraid to exaggerate, seems to be that of the “smuggler” of the death, or the end, of appearances. While he also plays with great mastery and intelligence, on stage he’s as physically present as his instrument.

What’s being played here, if it’s not our symbolic demise within the death of the compositions as they’re replayed and transformed through “live” performance and improvisation?

Within the principles of free jazz, it’s as if the music were being executed, according to both meanings of the term: the pieces exist as such only once, at the moment that they’re played. Their death is thus brought on each time, carried out during the performance and the improvisation.

And Robert Glasper, who presents himself as the figurehead of this trio, invites us to take part. His piano summons us, beckons to the music of his partners, who know each other like the backs of their hands. We share their closeness. Robert Glasper is the guest of honor. His piano extends itself to the other instruments.

The myth of an alternative avant-garde youth, drawing its depth from a Warhol “Factory -like” universe that’s particularly hip pretty much everywhere right now in artistic circles, is less convincing than the quality and straightforward presence of this trio.

*: The Robert Glasper Trio and Bilal, September 12, 2010 at the Cité de la Musique during the “Jazz à la Villette” Festival in Paris, France.

**: One example of free jazz, among many, is the album Zugzwang, by Ursus Minor, that brings together French and American musicians (Tony Hymas, Jef Lee Johnson, Mike Scott, François Corneloup and David King) for a “collage” recording that blends jazz, rap, rock and soul music. This “nucleus” can’t be replayed exactly the same way in concerts, and is modified from one album to the next.